Somerset has no shortage of iconic and well-known bench ends. Most notable perhaps are the Reynard the Fox bench ends at Brent Knoll, but only slightly less well-known is the Crowcombe Dragon. 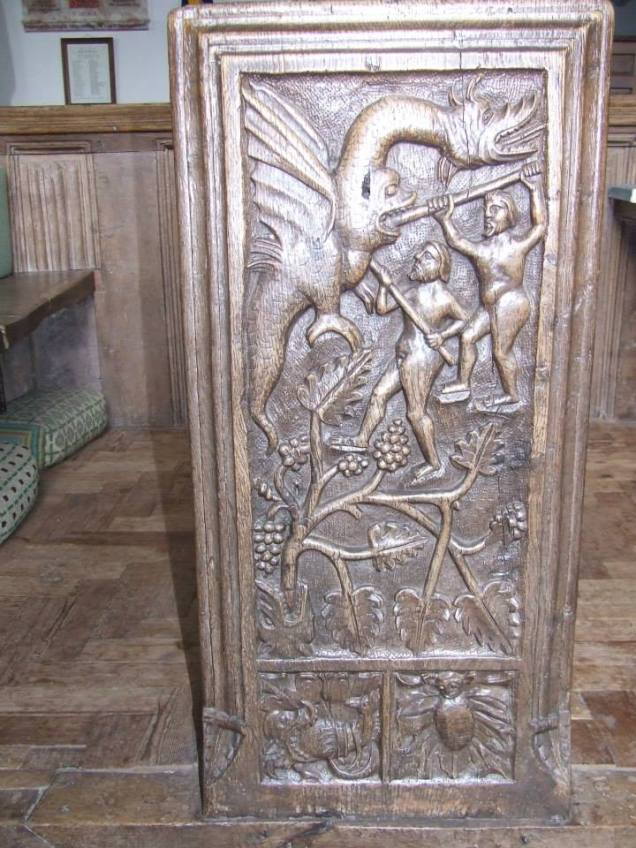 Local pundits will cheerfully tell you, as they did me, that the Crowcombe dragon bench end is a depiction of the local legend of the Gurt Wurm of Shervage Wood. Like many places, Shervage Wood in the Quantock hills was once, so the legend tells us, home to a dragon, the ‘gurt wurm.’ The details of the legend differ in the telling, but essentially an enormous dragon lived in the wood and preyed on the local livestock and wildlife as gurt wurms are wont to do, much to the dismay of the local peasants. One day an itinerant woodcutter was employed by a wily crone, sent into Shervage Wood to cut firewood, and given a can of Strongbow and a Ginster’s sausage roll for his lunch. Come lunch-time he sat himself down on a large fallen tree to eat his fare, but upon opening up his He-Man lunch box the tree on which he sat gave a lurch and he spilled his Strongbow all over the ground. Angered, he picked up his axe and laid into the misbehaving tree, which started to bleed. It was of course the sleeping gurt wurm which he had cleft in twain, much to the joy of the peasants and the wily old crone. Then there’s some stuff about pies and a fair which isn’t really germane to this article. Or something like that.

So, everyone in and around Crowcombe knows that the bench end shows the legend of the gurt wurm. Local schoolchildren are even taken to the church to see the bench end and told the tale. The problem is that even a cursory comparison of the bench end above with the story of the wurm reveals a few discrepancies. The dragon on the bench end is not sleeping as the worm was, there are two men not one, and they are armed with spears, not axes. And why are the woodcutters naked? In short, the Crowcombe Dragon is not the Gurt Wurm of Shervage Wood.

The story of the gurt wurm was not widely known until the 1960s, when it appeared in the late Ruth Tongue’s book, Somerset Folklore. Tongue was a fine storyteller, and is rightly lauded as such, but was not above embellishing or even inventing stories where none had previously existed. I searched high and low for earlier references to the gurt wurm without success, and I began to wonder if this was one of the stories that Tongue had invented, perhaps inspired by the Crowcombe Dragon – in short, did the story come from the bench end rather than the other way around. Then a tip off from Mr Rook of Mr Rook’s Speakeasy led me to C.W. Whistler’s article, ‘Local Traditions of the Quantocks’ in the 1908 volume of the journal Folklore. Whistler’s article mentions the story of the Gurt Wurm of Shervage Wood, albeit in a simpler version than even my summary above, and absolves Tongue of any suspicion that she made it up. However, Whistler mentions three dragons in the Quantocks: the gurt wurm of Shervage Wood, the dragon of Norton Fitzwarren, and the Crowcombe Dragon. This does not prove, of course, that the Crowcombe Dragon and the gurt wurm are separate entities, but it does show that they were considered to be so as late as the early 20th century.

So, if the Crowcombe Dragon is not the Gurt Wurm of Shervage Wood, where does it come from? The clue is in the dragon itself. You see, no true expert on dragons (yes, such people do exist) would call it a ‘dragon,’ it’s a gastrocephalic wyvern. That is to say, a dragon-like creature with a head in its stomach and only two legs. Gastrocephalic wyverns  are certainly distinctive, but they are not entirely unusual in medieval and Tudor art. In fact, there’s another not too far away on a misericord in Bristol cathedral.

The Bristol misericord shows elements familiar from the Crowcombe Dragon carving: men running about in the altogether, and of course a gastrocephalic wyvern. It is also roughly contemporaneous with the Crowcombe Dragon, having been produced only a few years earlier. Bristol Cathedral was, until the dissolution of the monasteries, an abbey church, and internal evidence on the misericords dates them to the time of Abbot Robert Elyot, 1515-1526. The Crowcombe bench ends are dated 1534, so we can be reasonable certain that the two carvings were made between eight and nineteen years apart, and that the Crowcombe Dragon is the younger of the two. 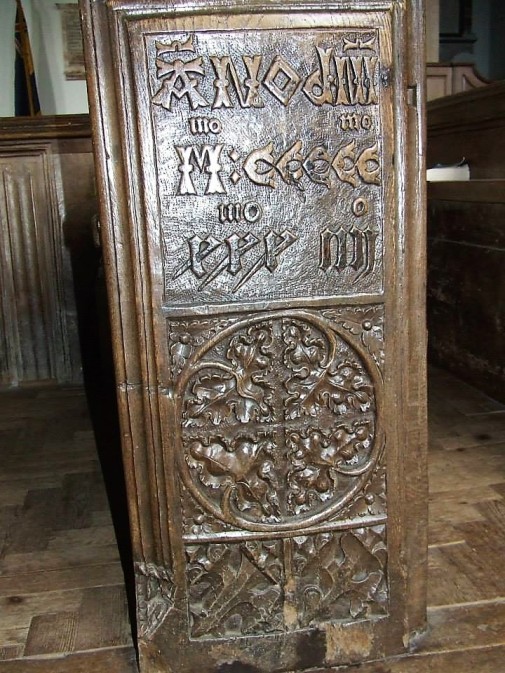 The men who were running away from the dragon (sorry, gastrocephalic wyvern) at Bristol had turned to fight it by the time they reached Crowcombe. If there was any significance in this fact then it has long been forgotten, but any reasonable observer of the two carvings would be hard-pressed to argue that they did not share a common influence. Conceivably the Crowcombe carving was directly influenced by the Bristol carving, and there is at least a possibility that they were carved by the same person or workshop. The question, then, is from whence came the inspiration for the Bristol misericord.

The Bristol misericord is very similar to yet another roughly contemporaneous carving, showing the same scene, albeit with only one fleeing naturist, on a misericord in Throwley church, Kent. It’s not impossible that both were executed by an itinerant wood carver with a penchant for gastrocephalic wyverns and naked men, but it is far more likely that both were influenced independently by printed engravings by the Paris-based German printer Thielman Kerver (fl. 1497-1522) whose elaborate borders were printed originally in French books of hours, but were borrowed by other early printers to illustrate their own texts. The image below first appeared in a book of hours in Paris around 1500, but was re-used in subsequent publications.

There can be no doubt at all that the Bristol misericord was based on this image. Not only does it also feature the same dragon, but the three naked men are all in the same positions (more or less) in both images. Despite appearing in a religious text it is unlikely that the image is Biblical in nature. It might perhaps represent the Beast of Revelations, but it has too few heads. Alternatively it might be a generic allegory for Satan or the eternal battle between good and evil. More probable, though, is that it is simply a fantastical image of a type commonly found in late-medieval and Renaissance art. Other designs used by Kerver in his borders were definitely secular, involving hunting scenes, music, and fantastical beasts.

I have scoured Kerver’s works for an image showing the men turning on the dragon as they do at Crowcombe, but have been unable to find anything similar, which leads me to the conclusion that while the Bristol misericord was copied from Kerver’s work, the Crowcombe bench end was probably inspired by the Bristol misericord. If C.W. Whistler was correct in saying that a story of a dragon existed at Crowcombe in 1908 then it is just as likely that the story was inspired by the bench end as the other way around, and no trace of a dragon in the area is recorded before 1534. It is possible, of course, that the Crowcombe Dragon is the last remaining record of an older legend, but on the evidence it seems unlikely. Quite apart from the fact that we can trace the inspiration for the Crowcombe Dragon through Bristol to Paris, there are other dragons depicted on bench ends (at Launcells and Chedzoy, for example), and indeed misericords, with no such legend attached to them. Apart from at Zennor, where a bench end is associated with an equally troublesome legend of mermaid, such local folklore does not generally appear in bench end carvings.

It is a pity to dismiss the connection between a bench end and local folkore, especially one so well established, but it is an important lesson that the things everyone ‘knows’ about bench ends are worth dissecting nonetheless. In this case, it is a testament to the importance of bench ends to their local communities that a carving can be the source of folklore rather than a record of it.

Welcome to Tudor Bench Ends of the West Country. For a fuller introduction have a look at the About page.

This is a non-profit undertaking, and the bench ends and articles are offered entirely free of charge. However, the cost of fuel to visit hundreds of churches, not to mention the guidebooks and the odd couple of quid dropped in the collection box soon add up, so if you've enjoyed my work and would like to support the site, please use the button below to make a donation, big or small.